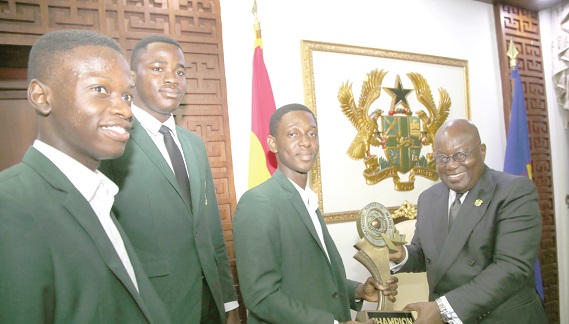 He said nations that had progressed and developed had done so because of their mastery in Science, Technology and Mathematics.
President Akufo-Addo said this when he welcomed winners of the 2019 National Science and Maths Quiz (NSMQ), together with their teachers, officials of the Ghana Education Service (GES) and the organisers of the quiz, Prime Time, to the Jubilee House in Accra last Tuesday.

The Quiz Mistress, Professor Elsie Effah Kaufman, was also part of the delegation.

St Augustine’s won the contest with 39 points, followed by PRESEC, which had 34 points, while PERSCO came third with 25 points.

President Akufo-Addo gave an assurance that the country would continue to apply its energy and resources to science education.

He commended St Augustine’s and all stakeholders, especially old students of competing schools, and the organisers of the quiz for their efforts.

A Deputy Minister of Education, Dr Yaw Osei Adutwum, who led the delegation, said the quiz was being sponsored by the Ghana Education Service (GES).

He said previously, students were made to contribute towards the organisation of the programme, but said with the advent of the free senior high school (SHS) policy, the government deemed it necessary to provide funding for the programme to help broaden the knowledge of students in the sciences.

Dr Adutwum paid glowing tribute to the St Augustine’s old students association (APSU) for their immense contribution to the success of their alma mater in the contest.