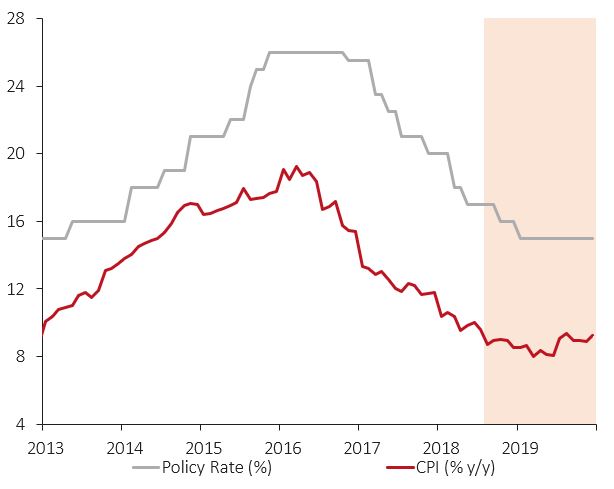 The current depreciation of the cedi and the inching up of inflation will not allow the Monetary Policy Committee (MPC) of the Bank of Ghana to reduce the policy rate this time, economic analysts have predicted.

The MPC will hold its 84th Regular Meeting from Tuesday, September 18-Thursday, September 20, 2018, to review developments in the economy, after which a decision as to whether to maintain, increase or reduce the policy rate will be communicated to the public.

However, economists maintain that the current macroeconomic structure cannot support a further reduction, as inflation and the local currency do not have a favourable outlook.

“I think, given the conditions now, the most appropriate policy would be to maintain or increase the monetary policy rate slightly upwards because there appears to be some pressures on inflation. Fuel prices have been trending upward and that is likely to impact on goods and services or likely to fuel inflation.

With the exchange rate pass through, we are likely to have some pressures coming on inflation. So, given these factors, I think either the policy rate will be maintained or increased slightly,” Dr. Eric Osei-Assibey, Senior Economist at the University of Ghana, said in an interview with the B&FT.

In his opinion, if the policy rate is reduced, further pressure will be on the local currency that is already experiencing a bad run and that will also impact on investment decisions and inflation alike.

“If it is reduced, it may not be an appropriate policy because, once your dollar is under attack there is so much pressure, you have to make alternative assets more attractive to investors so they can now see other financial assets as attractive.

And so, if you reduce it further, I am sure it will definitely have some kind of makeshift impact on inflation, unless we have a bumper harvest where the price of the food basket is going down significantly and that will reduce the inflation pressures. But in the absence of that, the most appropriate policy is for the central bank to maintain or increase he policy rate,” Dr. Osei-Assibey said.

Also commenting on the same issue, Professor Peter Quartey, also a Senior Economist at the University of Ghana, said increasing the policy rate will defeat government’s policy of making credit cheaper to the private sector, hence, he can only at worst foresee a stay in the rate.

“An increase in the policy rate will be contrary to current government policy of making credit cheaper and affordable to the private sector. I therefore expect the rate to be maintained given that inflation only increased marginally while the recent depreciation in the exchange rate is about Gh₵3.95 percent (from GH₵4.5 to 4.95 cedis),” he said.

Meanwhile, Ridle Markus, ABSA’s Africa Strategist, said in his 2018 Ghana Economic Overview that even though transport cost is rising and the local currency is under pressure, he remains upbeat about inflation prospects.

“Despite the MPC’s cautious stance, inflation has resumed its downward trajectory and could decelerate further (9.6% y/y in July) from 10.0% in June.

While transport costs rising and the FX under some pressure, we remain upbeat on inflation prospects, remaining within the 8% +/-2pp medium-term target into 2019. Key inflation threats include food prices, the currency and potential utility price increases,” he said.