TEF 2018: Entrepreneurship is the future of Africa- President 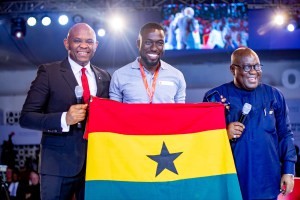 President Nana Addo Dankwa Akufo-Addo has reminded his colleague African leaders that the future of the continent rests on entrepreneurship.

He made this known at an interactive session moderated by the Founder of Tony Elumelu Foundation (TEF), Tony Elumelu at the ongoing TEF Entrepreneurship Forum in Lagos, Nigeria.

Addressing the over 5,000 young African entrepreneurs who are funded, trained and mentored by the Tony Elumelu Foundation (TEF),  Africa’s leading entrepreneurship-focused philanthropic organisation, President Akufo-Addo was emphatic that with the right policies, good governance and stable economies, the African entrepreneurs could rise up to the challenge.

He therefore used the opportunity to commend Mr Elumelu and his Foundation for their unflinching support to the young African entrepreneurs.

“This is what I’m doing in Ghana since my assumption of office in January 2017. I have set up the Ministry of Business Development and Investment” to support the growth and development of businesses in the country.

The President of Kenya, Uhuru Kenyatta who spoke via a video call, urged the African youth to take advantage of the TEF Entrepreneurship Programme to turn their fortunes around by venturing into entrepreneurship.

Mr Elumelu said: “We believe that the young African entrepreneurs can go far with our support. This is why we are investing more in them”.

Welcoming the entrepreneurs to the Forum earlier, TEF CEO, Parminder Vir OBE announced that the Foundation with partnerships from the International Committee of Red Cross (ICRC), GTZ, and others had increased the number of this year’s young entrepreneurs to 1,460.

The figure exceeds the annual target of 5,000 young entrepreneurs.
According to Mrs Vir OBE, in its 4th year, TEF Entrepreneurship Programme has empowered 4,460 entrepreneurs with a total investment of $20million; 4,000 funded directly by the Foundation and 460 have been funded by partners.

In a short statement, the Group Director of Marketing and Communications of United Bank for Africa (UBA) Plc, Madam Bola Atta said: “Together we can make a difference to our continent”.

The event held at the Federal Palace hotel was graced dignitaries including Peter Obi, vice presidential candidate of the Peoples Democratic Party (PDP), Executive Governors-A. Bagudu and Mohammed Abubakar of Kebbi and Bauchi.

The largest gathering of African entrepreneurs and the broader entrepreneurship ecosystem, according to the Foundation would unite the over 5,000 entrepreneurs, global investors, leaders from the African public and private sectors and developmental organizations at the Federal Palace Hotel, Lagos.

Its goal is to invest in businesses that will generate at least 1,000,000 new jobs and contribute at least $10 billion in new annual revenues across Africa.

In its 4th year, TEF Entrepreneurship Programme has empowered 4,460 entrepreneurs with a total investment of USD20million; 4,000 funded directly by the Foundation and 460 have been funded by partners.