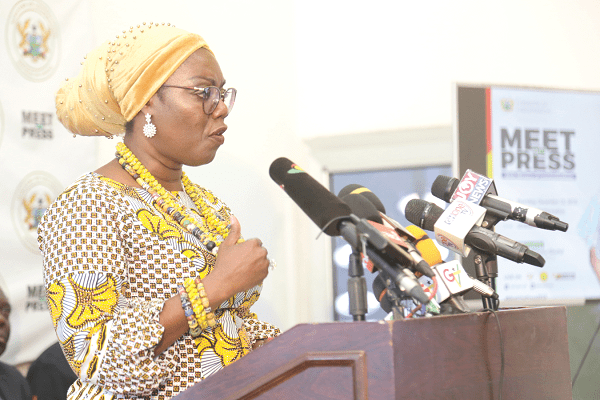 The e-services are currently being implemented in the ministries, departments and agencies (MDAs), as well as the Judicial Service, Parliament, the Ghana Immigration Service and at the Kotoka International Airport.

Under the initiative, e-Justice will bring efficiency in the justice delivery system; e-Immigration will facilitate speedy processing of travellers entering and exiting the country, while e-Parliament will support the paperless flow of information in Parliament.

The initiative forms part of the electronic transformation project funded by the World Bank to increase efficiency, accountability and responsiveness of public institutions. The Minister of Communication, Mrs. Ursula Owusu-Ekuful, made this known in Accra yesterday, when she took her turn at the meet-the-press forum to give an account of the performance of her ministry.

She highlighted the various initiatives the Communications Ministry had come up with in the past two years.

Throwing more light on the integrated e-governance projects, the minister said the government, keen on making state institutions more responsive, transparent and accountable in the manner they discharged public services, had been working with the World Bank to carry out the project.

On the integrated e-Immigration system, Mrs Owusu-Ekuful said the system that had been deployed by the GIS at Terminal 3 of the Kotoka International Airport would facilitate the speedy processing of travellers entering and exiting Ghana in a more efficient manner.

She said it provided a full immigration control system, including biometric identification of citizens and visitors, border management and issuance of visas, residence and work permits.

“e-Gates have been installed at Terminal 3 of the airport and have been launched. Since its installation, the system has processed 92,000 travellers (27,000 entries and 65,000 exits) in total, with average passenger processing time being one minute, 45 seconds,” she said.

She said the e-Parliament project aimed at supporting the House to electronically conduct parliamentary processes that would make for a paperless flow of information within Parliament.

“Operational acceptance is scheduled for January 2019, system development has been completed and the e-Parliament module has been deployed in the cloud,” she said, adding that technical staff had started trial testing of the cloud version prior to installation of the real version.

Additionally, she said, it would centralise the monitoring of procurement activities and eliminate physical storage of procurement documents, as information would be stored digitally and ensure compliance with procurement laws, among others.

“It is currently being rolled out at the VRA, the Ghana Health Service, the Tema Metropolitan Assembly, the Department of Feeder Roads, the Koforidua Technical University and COCOBOD and is expected to go live in January 2019. It will be scaled up to cover 600 procurement entities by 2020,” she added.

Touching on e-Justice, the minister said her outfit, in collaboration with the Judicial Service, was implementing the e-Justice integrated system to roll out electronic case/court management and administrative system of the 43 high courts in Accra.

She said as of November 2018, the system had been fully developed and rolled out, while the training of staff and lawyers on how to use it was currently ongoing.

“The e-Justice system has brought efficiency in the justice delivery system and lawyers, judges and court officials’ access to case files and information is now faster than before.

“The era of missing dockets and court processes is hopefully over. Judges and parties also have easy access to information, which ensures fast delivery of judgement. Time spent on the filing of cases has reduced significantly,” she said,

The minister also said “the electronic case management system has also reduced corruption, while the security of data is greatly enhanced as a result of the digitisation of court records” and gave an assurance that the system would be scaled up to cover all courts in all 10 regions.

Mrs Owusu-Ekuful added that other e-governance initiatives being implemented included the digitisation of the Registrar-General’s Department and the Ghana Revenue Authority (GRA), provision of smart workplace documents management and email system in MDAs, as well as the digitisation of the records of the Births and Deaths Registry.